Home > Case Studies > Blog > The end of all our searching: why accepting who we are is key to change for leaders and organisations

The end of all our searching: why accepting who we are is key to change for leaders and organisations

The end of all our searching: why accepting who we are is key to change for leaders and organisations

I am facilitating a leadership development programme for a group of young social entrepreneurs from marginalised backgrounds. These inspiring 20 somethings have created new projects out of nothing, often while working other jobs and battling personal challenges, all amidst the pressures of a pandemic. Each of them has imagined something to make the world better – fairer, kinder, happier, healthier, more whole. And each has decided to do something about it.

We are discussing business growth and project development. We talk about thresholds, about stepping beyond limitations and old patterns in order to move forward. I introduce an exercise about change and fear. Each young leader imagines moving from their current situation or way of being (‘position A’) to a next step – the new situation, decision or way of being they’re ready to grow into (‘position B’).

In between positions A and B on the floor we place a ribbon. This represents the edge. The edge is the boundary, the threshold, the liminal space we must step over anytime we journey from one situation to the next, one way of being to a new one. 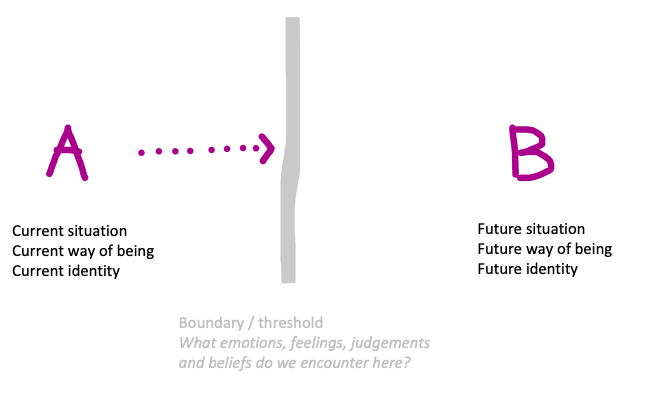 The group walk in silence, from one end of the room (actually it’s a cosy yurt in central London but that’s another story) to the other. Outwardly this is just a group of people stepping up and down a carpet over a ribbon. Inwardly, they are reflecting deeply, both moving and moved, sensing into their bodies, and opening internally to the impressions, insights and new information that come whenever we explore in this way.

In the debrief a little later the group share rich and meaningful experiences. They describe next steps that have now become possible, and inner obstacles they can now see and step beyond.

Then Amira (not her real name) talks. Amira has spoken very little in the group today or in previous sessions. She’s been unsure about the programme, and struggling with her participation in it.

Amira says that she has just had a deeply meaningful experience.

“I thought that moving to position ‘B’ would be about the next step my business needs to take. I thought it had to mean getting somewhere new, or reaching my next goal. I found I couldn’t do that [in the exercise].

But then I realised that for me position ‘B’ means being exactly where I am.

I am really struggling, my project faces many challenges, I have ongoing mental health issues. The difference is that in position ‘A’, I fight against my situation, I’m always trying to get somewhere else. For me position ‘B’ means things being the way they are, and really knowing that that’s ok. It is the place where I can accept where and who and how I am, rather than fighting or judging it the whole time.”

The Paradoxical Nature of Change in Life and Leadership

Amira said it much better than I could.

Accepting the truth of our situation, and of ourselves, with grace and humility is a powerful act of change.

Once we see this idea, we notice it everywhere:

Gestalt psychologists describe the ‘Paradoxical Theory of Change’. The idea that only by fully accepting our situation and who we are does change start to happen. Usually we fight, resist and struggle with our situation – both internally and externally. Paradoxically, resisting things keeps them as they are, while genuine acceptance allows something new to enter.

Mystic traditions describe surrender as a fundamental inner gesture on the path to waking up. But ‘surrender’ is a problematic word in the modern industrial West. It makes us think of being on the losing side, giving something up, failure and defeat. This suggests nothing to rejoice in.

The mystics knew that surrender really means giving up one’s inner struggle against the present moment, letting go of the endless resistance to what is NOW. They tell us that this way lies understanding, peace and joy. Crucially, surrender does not mean we don’t then take action in the world. But our activity now comes from peace and clarity, rather than from chronic struggle. Action based on relaxed acceptance of what is happening, rather than tight resistance or rejection, will be more creative, responsive and effective.

Be crumbled.
So wild flowers will come up where you are.
You have been stony for too many years.
Try something different.
Surrender.

The poets know it too.

Of course they do.

We shall not cease from exploration.
And the end of all our exploring will be to arrive where we started and know the place for the first time.

Maybe the true journey is to be fully where we are right now, and to know that it is good.

But what about business? What about leadership and organisations? Could such a thing be possible?

Leadership and business are so often about getting to the next place – project completion, milestones and deadlines, career advancement, the next goal.

The move to turn everything into a future oriented project runs deep and strong in our culture and inside of us. The inability to perceive ambition as a projection that – however useful and motivating on one level, also removes us from appreciation of the present, is deep. It is almost impossible to imagine business and organisation without future oriented ambition. Our biggest problems seem to need solving. Our biggest ambitions and most exciting visions compel us to move forward, to get to somewhere else.

This is deeply human. It’s wonderfully creative in a way. But in our culture, and in ourselves, and very much in business and work today, it’s become utterly one sided and thus a sickness. Creativity, ambition, growth and achievement are wonderful qualities when held lightly, integrated with the capacity to rest and be with things as they are. Without that spaciousness they become insidious, a constant subtle reason to reject, resist or resent aspects of our life and work – and therefore ourselves and our world.

To really know where we are, and to honour it, and not have to be elsewhere, is a fresh and wonderful thing.

Amira reminded us all of that when she crossed the line between A and B and found herself exactly where she started. But with new found acceptance and self-love and self-compassion.

And that was touching to see and it seemed to make all the difference.